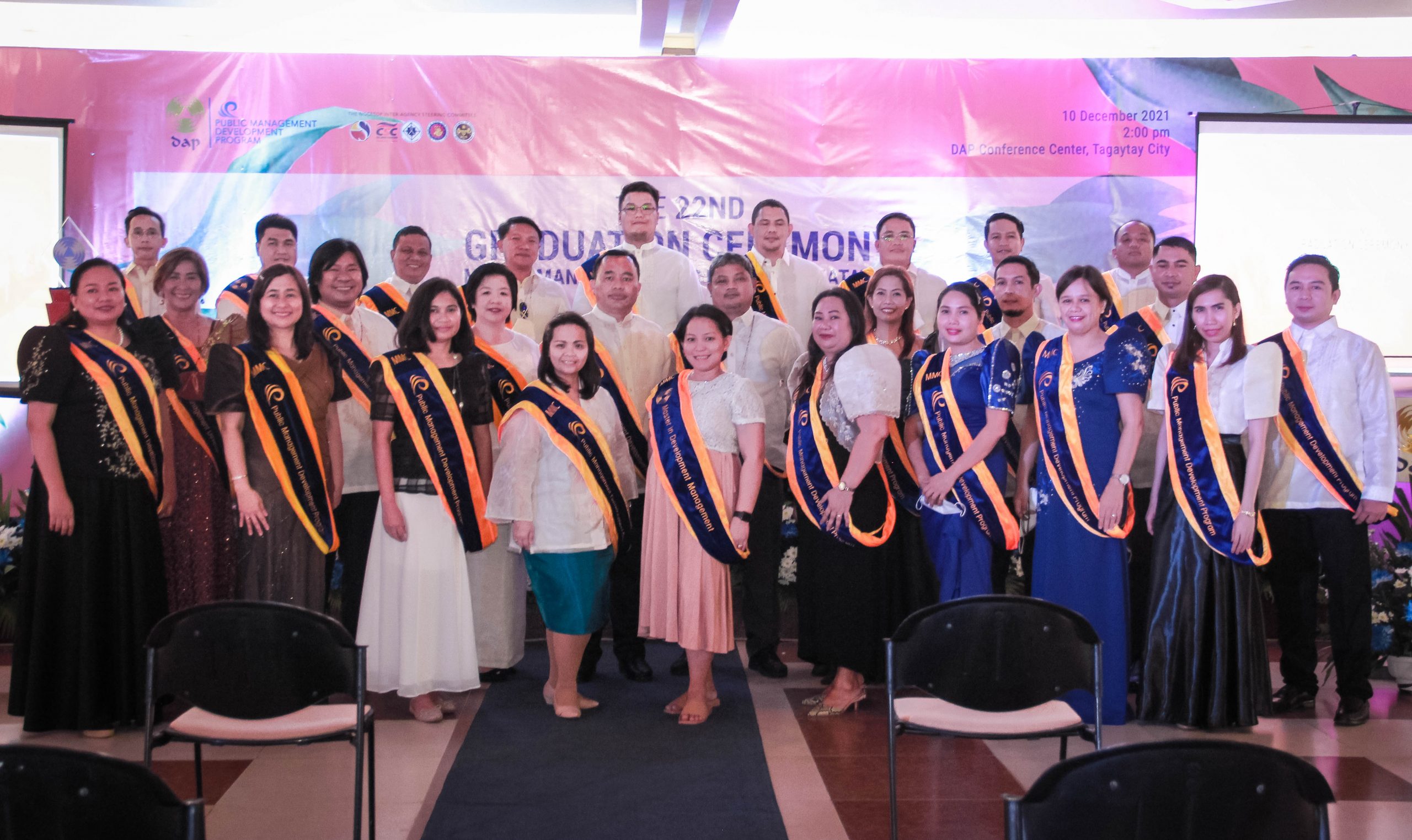 Referred by PMDP as a milestone being the first DAP unit to explore bubble face-to-face events post-pandemic, the Program was able to mount the event seamlessly, having faced efficiency and accuracy as big factors to consider amidst the short preparation time.

The ceremony started with a procession giving way to the candidates for graduation, Class Management Team, Program Managers, and major DAP Officials. Ever-clinging to the purpose of the Academy, DAP President and Chief Executive Officer Atty. Engelbert C. Caronan, Jr. duly accentuated the significance of retaining their values and ideals apart from the application of ‘development’ obtained from the Academy – this ideology defines a public sector leader, inspiring positive change in the community. While wishing the graduates well, President Caronan emphasized the significance of their role as public servants, and that is changing the lives of the Filipino people they serve.

Getting the blessing and welcoming message from the DAP President himself, and upon the presentation of DAP Senior Vice President for Programs Magdalena L. Mendoza, twenty-three scholars, now graduates from Middle Managers Class (MMC) Batch 23 – Matatag and one from MMC Batch 16 – Sangbigkis, were conferred upon a Master in Development Management (MDM), and awarded with a graduate Diploma in Development Management (DDM) and Certificate of Completion of PMDP Modules under the ladderized scheme of the Program. Six graduates from MMC23 were also awarded with DDM and Certificate of Completion of PMDP Modules, and four with the lone Certificate of Completion.

All thirty-three graduates from MMC Batch 23 – Matatag and one graduate from MMC Batch 16 – Sangbigkis made their way to the stage, carrying the pride of their Capstone Project which they completed with the guidance of their accomplished faculty advisers and institutional partners. Introducing the graduates was Class Director Aurma M. Manlangit.

After all have made their way to the stage to collect their hard-earned degrees embodied by their diplomas and certificates, the most awaited part of the programme took place. Graduation ceremonies will not be complete without bringing to light the graduates who have climbed their way to the top. Academic awardees came in first, and ranked fifth was Leah Ann A. Arella of the Department of Trade and Industry (DTI) – Central Office. Following her are other academic awardees—ranked fourth was Ramil S. Basuel of the Department of Tourism (DOT) – Central Office; ranked third was the batch’s Class President Ricardo Benjamin D. Osorio of the Public-Private Partnership Center (PPPC); ranked second was Maria Luisa Khristina C. Oliveros of the Department of Labor and Employment (DOLE) – National Capital Region; and finally securing the Class Valedictorian title was Rousel S. Justimbaste of Development Bank of the Philippines (DBP) – Head Office.

Meanwhile, PMDP also recognized the persistence in management and capacity to take the forefront for the class of the Leadership Awardee. The award was named after, none other than their double awardee Class President, Ricardo Benjamin D. Osorio of PPPC.

If demonstration of distinct leadership is acknowledged, their laborious Capstone Project is definitely of recognition. Having months of hard work that required such effort to be able to conceptualize, plan, write, report and implement it is totally an award that deserves much attention. Claiming the Best SMART Regulation Capstone Award is double awardee Leah Ann A. Arella from DTI – Central Office with her Capstone Project titled ‘Product Risk Assessment Guidelines for a Smart Regulatory Process in the Bureau of Philippine Standards’. Her Capstone Project went about providing a systematic and transparent process in identifying and declaring the levels of risk of different consumer products bolstering confidence in understanding product safety and quality thereby protecting consumers’ rights and privileges.

Lovervelle C. Olaco from the Philippine Statistics Authority (PSA) – Region XIII brought home the E-Government Capstone Project Award with her Capstone Project, ‘Establishment of an Online Inter-Agency Data Portal for the SDG Watch in Caraga’ that paved the way for the Philippine Statistics Authority in Caraga Region to effectively collaborate with relevant government stakeholders by creating a data portal that will compile, validate, and publish administrative-based statistics to monitor and evaluate contribution in the attainment of the Sustainable Development Goals.

In heartfelt tears and gratitude, Class Valedictorian Rousel S. Justimbaste of the DBP Head Office shared her humbling journey with the class, from being a part of the pioneer batch who have undergone virtual learning mode, to concluding their story through a bubble graduation. She recalled their class’ experience from early mornings that required the most staple caffeine, mentholated roll ons, and half a business attire, to clocking out at 12 midnight to fulfill their requirements online. All these struggles of online mode ignited the passion in them to chart new histories as they return to their respective agencies. According to her, Batch Matatag’s goal is to soon claim at least three high spots in their agencies, and that with their demonstrated transformational leadership, proven competence and the like, they would be able to do so. She closed her address with a complete gratitude from the closest friends, to the highest Almighty, never forgetting the journey that has been.

Now done with the journey and tagged as ‘alumni’ of PMDP, the graduates recited the pledge led by the Treasurer of the PMDP Alumni Club, Atty. Jayvee E. Villagracia. Shortly after, welcoming Batch Matatag to the Alumni Club were four members of MMC Batch 22 – Uhay alumni, personally fastening the alumni pins to the newly-hailed graduates. Furthermore, as the hype of reminiscing good memories occured, the class’ well-prepared Class Song, “Lipad” was played in view of their persistence and steadfast commitment to push the limits as far and high as possible, as they fully embrace change and innovation.

Next up was Undersecretary Jonathan E. Malaya from the Department of the Interior and Local Government who served as the keynote speaker of the ceremony. He recognized the country’s needs to have middle managers who can innovate amid unprecedented challenges, produce responsive solutions to difficult situations, and provide effective and transformational leadership. He applauded DAP and PMDP for continuing to be a venue where the most needed competent and effective middle managers are honed. The presence of excellent public servants in the bureaucracy will always be vital to make things work in the country. And as such, they all play a critical role in the lives of the Filipinos.

Towards the end of the ceremony, all sang the DAP Hymn with excitement. As the next segment of the programme came to a surprise, all were gathered in the area where the MMC Batch 23 – Matatag brass marker was mounted. Upon unveiling of the brass marker that has been sensationally etched with the graduates’ names, as led by President Caronan and SVP Mendoza, the graduates together with the DAP Officials took a photo together to commemorate another milestone recorded on the books.