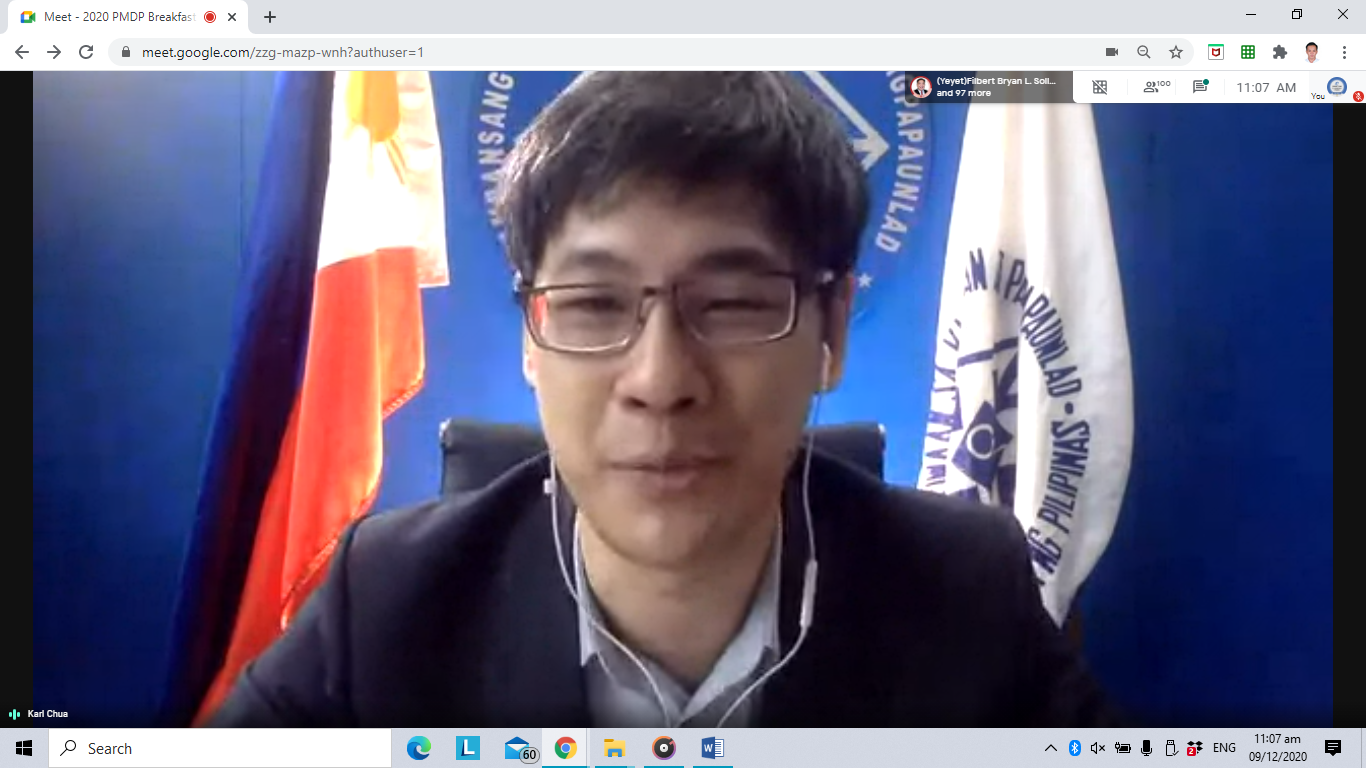 The event was met with much enthusiasm as the total number of participants reached almost two hundred (200), while it streamed on two different platforms—Google Meet and Facebook Live on the PMDP Facebook page. This was a first for the program as previous Breakfast Chats were held face-to-face in the DAP Conference Center in Tagaytay, with free-flowing coffee amid the scenic greenery.

DAP President and CEO Atty. Engelbert C. Caronan, Jr. gave the opening remarks and was in high spirits as he urged them to be ready with questions and to make use of the moment to learn more about the economy and COVID-19.

After the opening remarks, the floor was handed over to Secretary Chua, who imparted five (5) key messages in his talk. First being that the economy is strong enough to recover if we allow it to do so; saying that in the year 2020, the Philippines started with a strong foundation. Secretary Chua mentioned that the growth has been strong and steady, only held back by the Enhanced Community Quarantine (ECQ) and General Community Quarantine (GCQ) policies. Second, he said that the key is to manage risks, not to avoid them, and to open the economy as safely as possible, especially for those who are jobless still and those who need help, both COVID-related and non-COVID-related. The third key message was about how introducing fiscal stimulus is not the main intervention needed, but rather to open the economy as safely as possible, like tourism and public transportation, as long as they follow the minimum health standards. He also mentioned that with the advice of experts in the area, face-to-face and hybrid learning are being considered as well as lowering the restriction of children who can go out because families are one of the biggest spenders,  to increase consumption. He proposed that there be no reversals in quarantine restrictions since it creates uncertainty for businesses. His fourth key message was about supporting certain sectors to help open up the economy, citing the government’s Four Pillar Strategy and providing a quick rundown of the figures and the Congress’s passage of important laws. As Sec. Chua emphasized, the passage of laws will help recover the economy; first being the creation of the bill that lowers taxes and provides more targeted and performance-based incentives, and second, the Financial Institutions Strategic Transfer (FIST) Act bill that aims to cushion banks from the inevitable buildup of non-performing loans and assets due to the Covid-19 crisis. He ended with his fifth and final message—that the real debate is not between the health and the economy but saving lives from both COVID and hunger and other Non-COVID diseases.

Sec. Karl Chua giving his messages to the scholars and participants

The event then moved to the question-and-answer portion where the scholars and other participants asked Secretary Chua about the message he gave, as well as key issues surrounding COVID-19, the economy, and its recovery moving forward. It evolved into a fruitful discussion and dialogue between the participants and Secretary Chua.

Some of the participants who asked questions (Ms. Marife Lynn O. Pascua from the LBP Central Office and Mr. Wayne Belizar of DSWD Central Office)

The event ended successfully with the participants gaining more insight about the economy and COVID-19 – thanks to the dialogue with Secretary Chua!

PMDP is currently accepting admissions. For inquiries, you may send an email at pmdp.admissions@dap.edu.ph or visit the following PMDP’s official website and social media accounts: