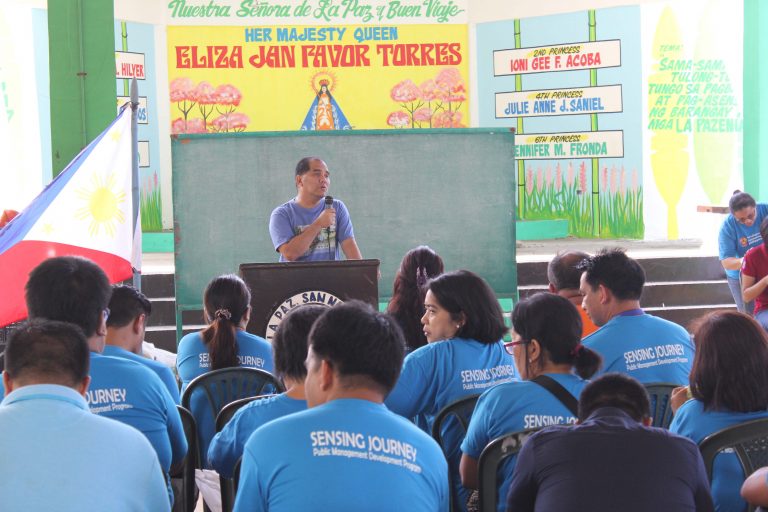 In a simple closing program which was held in Barangay La Paz, San Narciso, Zambales, Faculty-in-Charge Ms. Corazon Alma G. de Leon and Ms. Lucita S. Lazo congratulated the scholars for living with the community for two weeks, and for sharing their respective contributions with their households.

The scholars’ findings and recommendations

The scholars were given the opportunity to present their observations that they gathered during their stay in San Narciso, and their recommendations to the Barangay Council and Municipal Mayor.

The observations of the scholars were focused on education, early marriage / teenage pregnancy, child labor, livelihood programs, disaster management, and lack of potable water and sanitation.

The problem on education includes a number of out-of-school youth, and lack of classrooms and other school facilities. Some of the youth who are supposed to be in school are engaged in farming, fishing, and driving tricycles.

On the issue of early marriage and teenage pregnancy, the scholars who lived in Brgy. Dalipawen found out that almost 50% of pregnant women in their barangay are teenagers; the youngest is a 14-year-old.

The scholars also found out that some of their household members are not registered in PhilHealth. In their aim to address the issue, MMC 14 scholars from the Philippine Health Insurance Corporation informed the host families about the basic  health coverage and benefits that they are entitled to.

Also, to protect the rights of the farmers in the area and for them to have equal access to resources, the scholars also recommended to form an association of farmers in their municipality.

The scholars also noted the huge potential of the municipality on tourism because of its beautiful beaches in Brgy. La Paz, and on rice production in Brgy. Dalipawen.

Water sample from the barangays were collected and subjected to a series of tests. Initial findings showed that the quality of water in some barangays of San Narciso is not safe for drinking. They also found out that a lot of dissolved chemicals are present in the water, which they are yet to test if they are harmful or not.

The scholars recommended that pumping of ground water should be regulated since too much of it causes drawing in of pesticides from the farming region, thus presents hazard to the health of the people living in the area.

Further study will be conducted by the scholars to ensure that the constituents of affected barangays will have access to safe drinking water.

All of these findings and recommendations were welcomed by Mayor La Rainne A. Sarmiento. In her closing speech, she expressed her sincerest gratitude for choosing the Municipality of San Narciso as the site of the class’ Sensing Journey.

To formally finish the closing program, Ms. Milette Young of the Public Management Development Program thanked the officials of San Narciso for making the MMC 14 Sensing Journey possible. Ms. Young, being the Head of the Promotions and Recruitment components,  also announced  to the scholars the new eligibility requirements for the Middle Managers Class.

The Program will close the residential training phase of MMC 14—Anluwage on Friday, July 14, in DAPCC—Tagaytay. On the other hand, MMC Batch 15 will open on the following day, July 15, 2017.