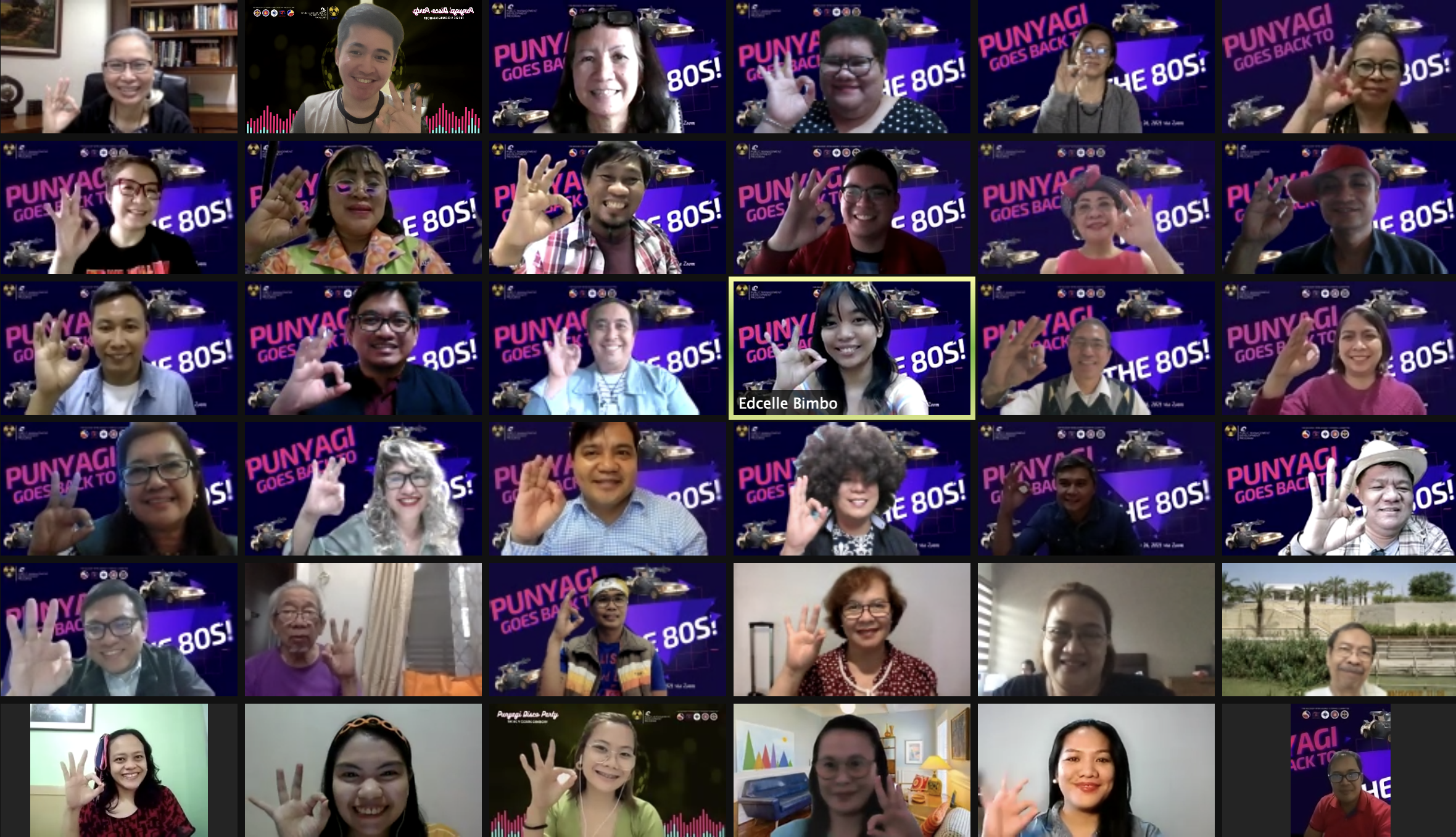 The Closing Ceremony of the Senior Executives Class Batch 9 was conducted 80s-style  last 26 July 2021 in a virtual event held via Zoom.

PMDP Managing Director Nanette C. Caparros opened the program by stating the agenda of the event which were to celebrate the conclusion of the training phase and recently-held Capstone Paper Revalida, acknowledge the people behind the successful implementation of the class modules and activities, surface key takeaways from the scholars live, and recognize talents and achievements unravelled during the 10-month-long training.

Punyagi Class Vice President William A. Beluso Jr. from the Bureau of the Treasury expressed warm congratulations to his batchmates for having reached this phase as the fruit of their ‘punyagi’ and extended his thanks to the whole team who put up all the activities together.

A special video tribute to the late TESDA Provincial Director Abdel Bakhri S. Hajan, a Punyagi member followed Beluso’s remarks.  El Cid H. Castillo from the same agency profusely extolled their fallen classmate and recalled his memories with them. He shared that from being strangers, Hajan was able to connect with his classmates through his personality, having a competitive spirit, wanting to effect change, and going for more than usual. In fact, they had the belief that he would be on top of the class as he gave his everything even in the smallest cases. Castillo then offered a meaningful Muslim prayer on behalf of the class to soulfully regard his presence in their lives and their intentions to guide him back home.

Five  scholars from each of the  learning teams narrated their SEC Punyagi 10-month  journey in the Program. Noteworthy was the story of Gay A. Enumerables of the Commission on Elections (COMELEC) as she shared her struggles in time management in order to reach this phase. It was a tough experience as she juggled her daily activities in the Program, her agency and her family. Despite this dilemma, she claimed that she still made the right decision as PMDP opened her eyes to new perspectives, and helped her understand her role as a government official more.

A buzz-worthy story from John Paul B. Cubero of COMELEC was also showcased. He said that before joining the Program, he looked for a new activity to do in this alternative work arrangement setting and luckily, he was accepted in the Program. However, he related that at some point, he considered quitting because of multi-tasking concerns—scholarly work on top of  office work. In spite of that thought, he claimed that this program truly widened their horizons and taught them that together, they could not  only do it, but do it well.

Wilfredo A. Dumale, Jr. of the Nueva Vizcaya State University (NVSU) took the chance as well, to affirm that the Program was the “…beginning of the renewed journey towards becoming a better public servant”. Apart from thanking everyone involved in the Program, he wished that the virtual relationships be sustained through a rekindling activity after the pandemic.

While the event was poignant with the scholars reminiscing their PMDP experiences, it  became fun and raucous after several games like the Complete-the-Song contest, the Singing Bee and the Guess-Who-Game which they tagged as ‘Punyag80s’ were facilitated by Learning Managers Luis Emmanuel Baldivia and Edcelle Dominique Bimbo.

Along with these entertaining numbers, Peer Awards was also a part of the programme. From the name itself, it was the scholars themselves who nominated one another for some 80s-themed awards creatively conceptualized largely by Class Director Lisa Inez C. Antonio. The Princess Diana Award was given to Elvie E. Albano of DBP for having been always well-put together at all times; the John Travolta Award was bestowed to William A. Beluso, Jr. of the Bureau of the Treasury for being the male counterpart Ms. Albano; the Robin Williams Award awaited the Class President, Ryan R. Gabinete of DBP for being the acknowledged Class Comedian; the Top Gun Award was grabbed by Wilfredo A. Dumale of NVSU for being the most active scholar in the module activities; the Madonna Award was given to Marife Lynn O. Pascua of the Land Bank of the Philippines (LBP) for providing top-tier level of performance in group workshops; the counterpart of the Madonna Award, the Best Performer Award, was bestowed to El Cid H. Castillo of TESDA; and finally, the Don’t Stop Believin’ Award which appreciated the scholar’s determination to come to class despite the hurdles of distance learning, was also presented to El Cid H. Castillo of TESDA.

Ecstatic celebrations would not be complete without the Male and Female Best-Dressed Awards. Three men and three women gathered in the spotlight to flaunt their grazing yet groovy 80s outfit, but claiming the show-stopping Disco King and Queen Awards were Demetrio P. Anduyan, Jr. of the Commission on Higher Education (CHED) and returning awardee, Elvie E. Albano of DBP.

After all the fun and games, the program proceeded to its core: the appreciation part. Class Director Antonio recognized scholars who she believed deserved certain citations. She first extended her appreciation to the SEC 9 Class Officers who demonstrated top-of-mind leadership and nourishing support to the class from the beginning until the end.  These included  Ryan R. Gabinete of DBP, William A. Beluso of the Bureau of the Treasury, Elvie E. Albano of DBP, and Marife Lynn O. Pascua of LBP. Also, part of the CD Awards is the Consummate Journaling Award. This was granted to scholars who consistently  wrote insightful and significant experiences of their PMDP journey. Recipients of this award were Maria Lilibeth G. Castil of the Bohol Island State University (BISU), Rowena T. Quiambao of the Department of Education (DepEd), Virgilio Julius P. Manzano, Jr. of the Mariano Marcos State University (MMSU), Victor C. Canezo of Biliran Province State University (BiPSU), and Wilfredo A. Dumale, Jr. of NVSU.

An online Appreciation Board was made available for everyone as Class Director Antonio made her Pabaon, and raised the idea that SEC 9 – Punyagi should consider striving for mediocrity instead of excellence. She suggested that they should contribute and implement the best practices, as the rules and changes that they will produce today will become the norms of tomorrow. Faculty member Sofronio F. Llorin supported the statement of CD Antonio, and said that as they continue to create excellence and shape the future with ‘mediocre’ practices, they should be reminded of their true purpose in life. He reiterated that public service is not just a personal concern, but a great responsibility—that accountability in this field would go about and beyond their personal lives.

The Pabaons was shortly followed by the audio-visual presentation showcasing nostalgic clips from module sessions and activities to summarize the SEC 9 story on the whole duration of their training phase.  After watching the AVP of the batch’s journey, SVP for Programs and SEC 9 Capstone Paper Faculty-in-Charge Magdalena L. Mendoza capped off the ceremony by thanking the entire batch for their perseverance and again, ‘pagpu-Punyagi’. She noted that if the country has a quality bureaucracy especially in the Senior Executive level, there will likely be an increase in our Gross Domestic Product (GDP) regardless of transition of administration. By that time, public servants and their agencies would be fortified in structure, attaining PMDP’s main goals—to nurture their skills for a steadfast organization, put learning into action and keep the Program’s teachings at heart.